How To Save On: Lighting

I needed some more light in my living room, I only had the one light in the ceiling fan and a small lamp from Ikea and it just wasn’t enough. I also have a big blank white wall behind my couch and I hated it. I tried looking for something artsy to put behind it but because it was such a large space, they were all really expensive ideas.
Then one day, I was wondering aimlessly through Target and probably buying things I did not really need, I found the solution. There were these beautiful vine planters, that looked like wrought ironwork but were about 1/5 of the price, at least and much lighter. For only about 60 dollars, I grabbed three. Then patrolling along the Christmas clearance section, I found these beautiful iridescent Christmas lights on sale for about a dollar per strand. I quickly grabbed a bunch, (I still have leftover strands) and knew I had found my solution. 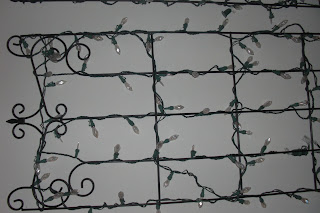 I twirled the lights around the vine growers so that the outlets were mostly hidden and then spray painted some small gold wall hooks black. I used four hooks per panel to secure them to the wall. 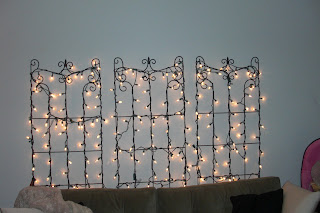 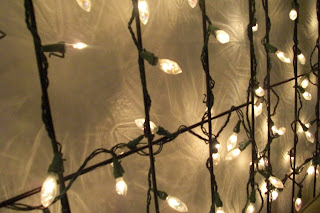 As you can see, it gives my couch the light it needed without it being super bright or too confined of an area. I love plugging them in during a party and turning off the overhead lights, it gives this wonderful soft glow to the place and did not cost me an arm or a leg. Not only did I get the lighting I needed, I also was able to cover up the ugly blank wall.

Email ThisBlogThis!Share to TwitterShare to FacebookShare to Pinterest
Labels: Art, blank wall, How to Save, lighting